The Basque region of Spain located in the North of Spain with border to France. Here you find coast land and fertile fields in the inland,forests and mountains where you always ensure the Northern Spain access to high quantities of fresh fish, shellfish, meat and vegetables.

Most food enthusiasts know that Basque Country — the Michelin-starred mecca and autonomous territory of Spain.

A total of 29 Michelin restaurants are located along the coast of Biscay Bay and inland on the Spanish side. Counting on País Vasco – or Basque Euskadi – has 29 Michelin stars in 20 restaurants: 15 with 1 star, one with 2 stars and four with 3 stars.

In the seventies, after researching, innovating and extending the repertoire of traditional Basque cooking,  chefs like Juan María Arzak and Pedro Subijana in San Sebastián started a movement towards a modern Basque cuisine inspired by French nouvelle cuisine, but adapted to their own regional conditions.

Traditional cooking based on the quality of its products and their simple preparation, with roots in public tradition and in which seafood plays a special part, although  the tasty meats and local products such as beans, cheese and junket.

These and other products complete the extensive repertoire of its traditional gastronomy.

Wine in the Basque Country is divided into two main categories: Txakoli, which is the traditional Basque wine; and the wines from the Rioja Alavesa, which produces wines under the DOCa of Rioja. Txakoli has been a part of the Basque culture for many years.

In recent years, txakoli has acquired quite a fame. This is mostly due to the high quality of the products, but another reason for its recent spread is that it adequates very well to the actual wine trends: it’s light, cold and fruity, and so easy to drink you’ll be finishing the bottle before you know it. Txakoli normally accompanies fish, sea food and rare meat, but it’s also very common to drink it with pintxos (the Basque tapas).

Its cool flavor, paired with a fresh pintxo of hake, will make you wish you could spend more summers in Sp

A wide range of wild-caught seafood as well as all kinds of fresh meats.

You find the largest number of Michelin stars per capita, San Sebastian sparkles unlike any other gastronomic city in the world.  The Cider is one of San Sebastian’s best kept secret.  This fresh drink based on apples is produced some of the villages like

GETARIA The attractive medieval fishing settlement is a charming fishing village where you can enjoy fresh-caught fish right at the port accompanied by the local white wine called txakoli. It is wedged between two beautiful beaches and also has a little islet that makes it for a nice hike.

Moreover, it is the birth town of the famous fashion designer Balenciaga and you can visit the museum devoted to him.At the end of the harbour is a forested island known as though any resemblance to a rodent is only visible after several strong drinks.

Perhaps it was this giant mouse that first encouraged the town’s most famous son, the sailor Juan Sebastián Elcano, to take to the ocean. His adventures eventually led him to become the first man to sail around the world, after the captain of his ship, Magellan, died halfway through the endeavour.

Day 1 Arrival and Dinner at the Hotel
Pick up and drive to our hotel hotel in Bilbao with view to the Guggenheim Museum. Private Guided History and pintxos tour in Bilbao.
Day 2 Rioja Wine Experiences
Private Visit at the innovation bodega Marqués de Riscal with en excellent wine tasting. Transfer to a traditional family run bodega located in the capital of the Wine region Laguardia. Introduction the their wines and tasting and a country lunch with local products in the Bodegas own restaurant.
Day 3 Txakoli and Michelin Star Restaurant
Check out from the hotel in Bilbao. And drive to Getaria a small fishing village where we will visit on of the unique and local Txakoli bodega with wonderful view to the Biscay Bay with tasting with local snacks. Lunch in the port of Getaria with en excellent seafood meal. check in to the hotel in San Sebastian located at the seafront on la Concha beach. Dinner in one of the Michelin Star restaurants in San Sebastian.
Day 4 San Sebastian and pintxos cooking lesson
Check out from the hotel in San Sebastian. we will meet for a pintxos cooking classes tasting all the dishes with paired local wines.

Let us  indulge your into the food and wine culture of Basque Country.

Contact us for a tailor made  unique privateBasque Country 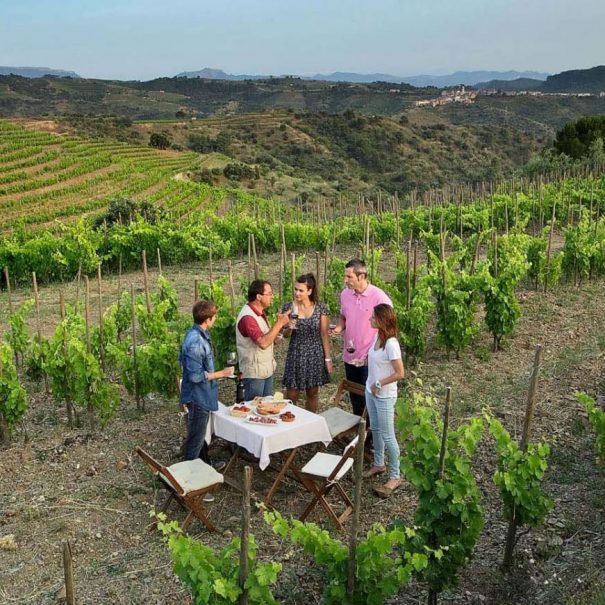